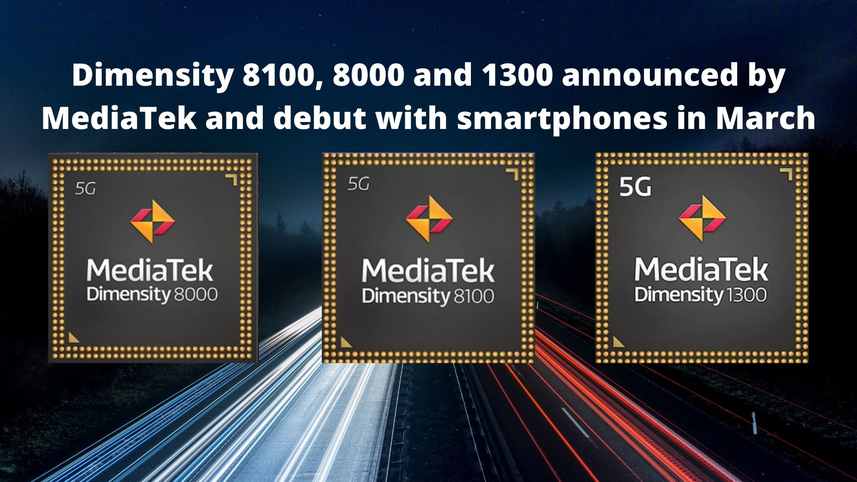 MediaTek has announced its high-end rivals, the Dimensity 8000 and Dimensity 8100, to compete with Qualcomm in the flagship sector. Both chips are 5 nm and have the same hardware. The 8100, on the other hand, is a silicon professional gambler, and it runs at faster speeds. The Dimensity 1300 is a minor enhancement over the 1200 chip.

The MiraVision 780 is present in both processors, and it supports a 168 Hz refresh rate at FHD+ resolution. The 8100 chip also supports 120Hz at WQHD+, which is a notable distinction. Both include 4K AV1 video decoders and HDR10+ Adaptive compatibility (which adapts HDR10+ material to ambient light conditions).

The Imagiq 780 ISP can record HDR footage from two cameras at the same time at 5 gigapixels per second, as well as 4K 60 fps HDR10+ from one camera. This ISP supports cameras with up to 200 MP sensors, 2x lossless zoom, AI-powered noise reduction, and HDR imagery out of the box.

Both chipsets have 3GPP Release 16 5G modems with two carrier aggregations for up to 200 MHz of throughput. This enables download rates of up to 4.7 Gbps. 5G+5G Dual SIM, Dual Standby mode is supported by the modem.

The Dimensity 1300 is virtually identical to Dimensity 1200, with the exception of increased NPU performance for night mode and HDR processing with AI.

In the first quarter of 2022, smartphones with a Dimensity 1300, 8000, or 8100 chipsets will be available, so expect a flurry of announcements from “some of the world’s greatest smartphone manufacturers” in March.

The first phones with the Dimensity 8000 series are expected to arrive in “the next couple of weeks,” according to Mediatek, who also predicts a larger worldwide adoption than the Dimensity 9000.

While Mediatek isn’t in charge of device pricing, vice president and general manager of marketing Finbarr Moynihan told media that the Dimensity 8000 series phones should cost between $400 and $700.