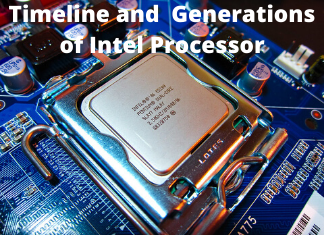 As we all know, Intel is well known for being a giant processor manufacturing brand. As we look behind about 10 – 15 years, there wasn’t any brand that stands in front of Intel. At that time, mostly Intel processors were used in all the computers. As time passes, the advancement of technology imparts the best out of best Intel processors. But in today’s world, there is a brand that is known to be a good competitor to the Intel brand and is known as AMD.

Whenever you see the various ranges of Intel processors, you might notice a thing that Intel releases its series of processors in a generation-wise manner. Do you know what’s the fact behind this? As we all know that technology is improving and updating rapidly as time and days are passing through. So, whenever the improved or better technology has been implemented in the processors, Intel releases its processors with the new edition. This series of new editions of processors are released by Intel in the form of a new generation. Basically, the sequence of releasing the processors in these generations starts after the commencement of Core i-series processors (i3, i5, i7, i9 CPUs).

The First Generation of Intel CPUs is based on Nehalem micro-architecture. It is released by intel in 2008. This microarchitecture is based on 45nm process technology. These processors have 731M to 2300 Million transistors of size 45nm each. In the performance section, the clock speed of first Generation Intel processors ranges from 1.06 GHz to 3.33 GHz. Nehalem series has a minimum of 2 cores and a maximum of 6 cores.

The cache memory of these processors has 64 kb per core of L1 cache, 256 kb per core of L2cache, and 4 MB to 24 MB of shared (used by all the cores) L3 cache. Hyper-Threading technology was also reintroduced in this generation. It supports 1156 LGA sockets and 2-channel DDR3 RAM.

The clock speed of this generation ranges from 1.60 GHz to 3.60 GHz. Nehalem series has 1 to 4 cores of normal CPUs, 4-6 cores in Extreme variants, and 2-8 cores in Xeon series processors at that time. The cache memory of CPUs of this generation having 64 kb per core of L1 cache, 256 kb per core of L2 cache, and 1 MB to 8 MB of shared L3 cache in normal variants 10-15 MB in extreme variants and 3-20 MB of L3 cache in Xeon series processor. It supports an 1155 LGA socket and 2-channel DDR3-1066 RAM. This will give an 11.3 % increase in performance as compared to Nehalem(1st generation of Intel) Processors.

Haswell is the codename used by Intel for its fourth Generation processors. This generation was launched on June 4, 2013. Basically, Haswell’s micro-architecture was also based on 22 nm process technology but it introduced very low-powered processors mainly designed for convertible or hybrid ultrabooks with the suffix- ‘Y’. It consists of 1,4 billion transistors(about 5.56 billion in extreme variants) in a single chip.

In the performance section, these processors are improved by 3 to 8% as compared to Ivy Bridge. It consists of 64 kb per core of the L1 cache, 256 kb per core of the L2 cache, and 2-45 MB in the shared L3 cache. It also consists of 128 MB L4 cache but for iris, Pro models only. The cores of these processors range from 2-4 cores for mainstream, 6-8 cores for enthusiast variants, and 2-18 cores for Xeon series.

Intel released Skylake, the 6th Generation processor in August 2015. Skylake is just a new redesign on the same 14nm process technology which was initially introduced in Broadwell (Intel’s 5th generation architecture). This generation was launched in August 2015. According to Intel, its redesign makes a great difference in the increase in its CPU and GPU performance and low power consumption.

Its maximum clock speed reaches up to 4.5 GHz. The cache memory of this generation is the same as the previous generation for the L1 and L2 cache but there is 2 MB per core of the L3 cache. This architecture supports 2-28 cores of CPUs. Skylake is the last microarchitecture that has official driver support by Microsoft for Operating systems older than Windows 10.

The Micro-architecture of this Generation is known by Intel’s codename ‘Kaby Lake’ and was launched in August 2016. Kaby lake began to ship their Kaby lake chips for mobile OEMs in the Quarter phase of 2016 but Kaby Lake desktop chips were officially launched in January 2017. Kaby Lake is of course a refresh of Skylake architecture with few efficiencies and power optimizations. CPU Clock speed performance ranges from 1.00 GHz to 4.5 GHz. The number of cores ranges from 2 to 4 cores.

Kaby Lake is the first Intel platform that lacks the official driver support by Microsoft for Operating systems older than Windows 10. Kaby Lake was designed to improve the performance in 3D graphics and 4K video playback. It supports 1151 LGA sockets and has dual-channel support for DDR3L-1600 and DDR4-2400 RAM slots. Its L1 and L2 cache are the same as previous generations and the L3 cache is up to 8 MB which is shared by all the cores of the CPU. Kaby Lake is the first computer architecture that enables overclocking features for I3 branded CPUs.

In 2017, Intel redefined Kaby Lake processors as their new 8th Generation CPUs. The specifications are the same as mentioned in the 7th generation (Kaby Lake) Intel processor but 8th generation processors support DDR4 RAM up to 2666 MHz frequency but lack DDR3L RAM support.

Intel’s brand new 9th Generation was launched in October 2017 but come in sale in early 2019. This generation was known by Coffee Lake name suggested by Intel on behalf of their microarchitecture(Coffee Lake). This is the first generation platform for the commencement of a brand new I9 processor which reaches up to 5 GHz of clock speed in its activated turbo boost technology.

This generation brings gaming PCs to the next level. Because Coffee Lake processors break the limit of 4 cores per CPU. Now the new processors support up to 8 cores per CPU. It supports 1151 LGA sockets with altered pinouts to support more than 4 cores along with up to 16 MB of L3 cache. Since there are more than 4 cores then definitely it will impart heat enormously. To manage it’s thermal, intel attached Integrated Heat Spreader (IHS) to their CPU instead of thermal paste which was used earlier in their previous generations.

Cannon Lake, Intel’s 10th Generation architecture, was introduced with all new 10 nm process technology. It was released in late 2017 but production properly started in 2018 and began its sale in early 2020. This generation was best in power efficiency due to its small build form factor of 10 nm and due to minimum production of heat then clock speed will also increase in this segment up to 5.3 GHz in its I9 unlocked high-end series processor. I9 10th gen Processor is the World’s fastest mobile processor segment.

Ice lake is the 2nd generation for the 10 nm CPUs.

They use BGA 1526 sockets and come with DDR4 RAM with 3200 MHz and LPDDR4X RAM with 3733 MHz frequency support. This is the first processor architecture by intel that comes with integrated support for Wi-Fi 6 (802.11ax) and Thunderbolt 3 USB port. This architecture is a boon for portable computing devices like laptops, mobiles, etc, because this architecture is most energy-efficient and releases less amount of heat hence improving the performance by increasing clock speed and battery life.

Intel’s 12th Generation, Alder Lake architecture was launched on November 4, 2021, which is based on Intel 7 nm (previously referred to as Intel 10 nm Enhanced SuperFin) lithography. Intel combined hybrid technology for the first time which includes the mixture of bigger high-performance cores (Golden Cove) along with the smaller high-efficiency cores (Gracemont) as well in the PC (x86) lineup. Intel’s flagship I9 Alderlake processor is known to be the fastest processor in 2021 which got the lead of 13% increased performance in gaming as compared to its previous generation and twice the performance in productivity of content creation workloads.

The maximum clock speed of top Alderlake’s chip is 5.2 GHz along with an L1 cache of 80 KB per Goden Cove core and 96 KB per Gracemont core. L2 Cache is 1.25 MB per Golden Cove core and 2 MB per Gracemont core and the L3 cache is equipped with up to 30 MB which is sharable to all the cores. Its main features are PCI Express 5.0 technology for SSD (solid-state drive), Thunderbolt 4, USB 4.0 support, LPDDR5 memory of 4800 Mhz, or LPDDR4 memory of 3200 MHz, and a great enhancement AI (Artificial Intelligence) Vision as compared to the previous generation.

Raptor Lake is a micro-architecture that is being planned by Intel. According to Rumours, it will be a refinement of 10-nm technology in 2022 and an all-new 7 nm Build technology raised in 2023 with Meteor Lake.

2 thoughts on “Timeline and Generations of Intel Processor”