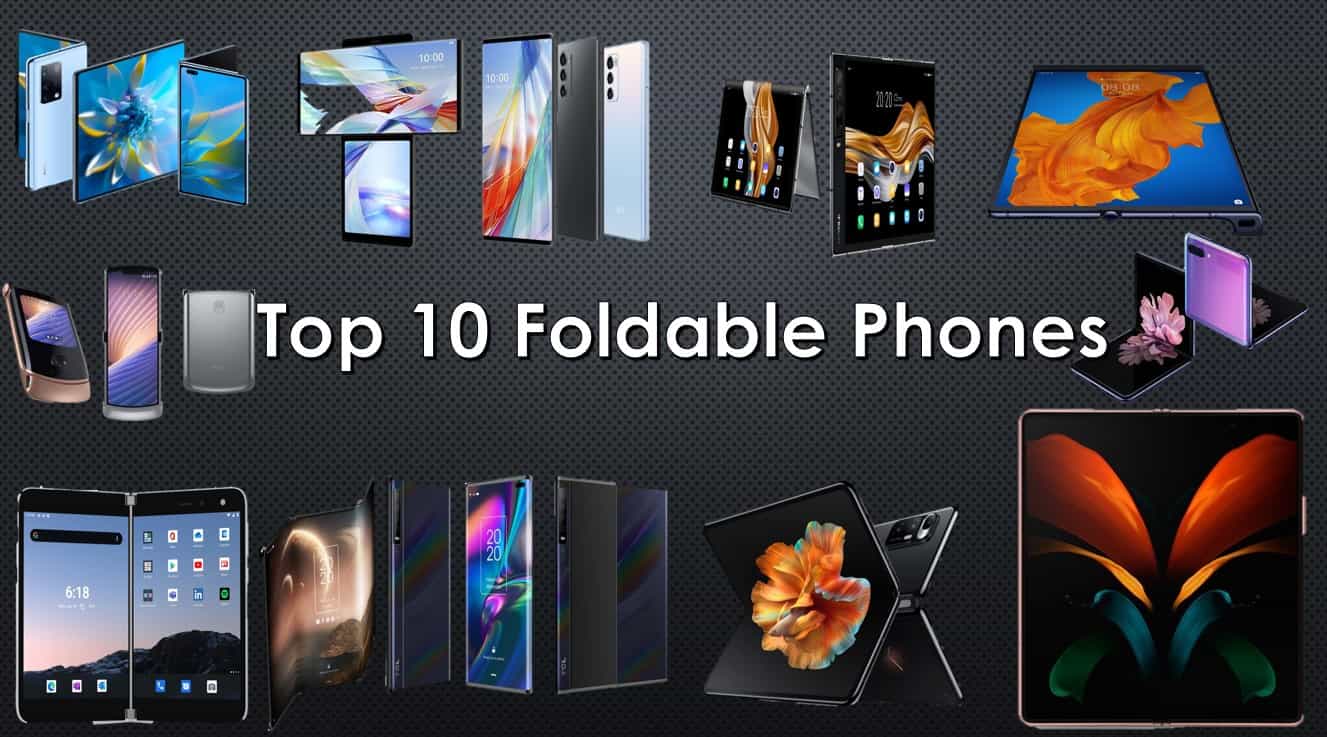 Samsung Galaxy Z Fold 2 5G is really attractive in appearance and it is packed with 7.6 inches 120 Hz Dynamic AMOLED display in a unfolded structure and has a default external display of 6.2 inch. On the specs this phones powered by Qualcomm snapdragon 865+ SoC with 12 GB of RAM and 256 GB of ROM capacity. Samsung Galaxy Z Fold 2 equipped with a 4,500 mAh battery with 25 watt fast wired charging and 11 Watt of wireless charging. By turning on the screen you get the OneUI 2.5 running on Android 10.

Samsung Galaxy Z Flip 5G is small sized handy foldable 5g capable phone which is equipped with 6.7 inch ‘Infinity Flex’ AMOLED display of 2636 x 1080 resolution. It is powered by Qualcomm Snapdragon 865+ SoC with 8GB RAM and 256GB internal storage. It is packed with 3300mAh battery which is compatible with 15 watt charging. In the software zone it comprises of OneUI based on Android 10 (Upgradable to Android 11).

Motorola is one of the leading smartphone brand and it’s Razr is one the good innovation. The Moto Razr is 5G compatible foldable smartphone which is featured with 6.2 inch pOLED vertical flip view display with a resolution of 876 x 2142 pixels with 2.7 inch gOLED display in folded condition. It has 20 MP of front facing camera fitted on a notch above the screen. The rear camera of this phone is of 48MP which also acts as a selfie camera in a folded condition. However, Moto Razr is powered by Qualcomm Snapdragon 765g SoC along with the Android 10 operating system. It has a 2800 mAh battery with 18 watt fast charging.

Xiaomi MI Mix Fold has an inward folding design just like Galaxy Fold 2 and Mate X2. If we se on the display side of this phone it comprises of 8 inch of AMOLED panel with 60 Hz refresh rate of WQHD+ resolution (2480 x 1860) along with 240 Hz touch sampling rate and HDR 10+ support. It is equipped with 6.5 inch AMOLED display of 2520 x 840 resolution with 90 Hz refresh rate and 180 Hz touch sampling rate.

This phones is supported by flagship Snapdragon 888 SoC coupled with 16GB LPDDR5 RAM, 512GB UFS 3.1 storage. In the camera section, it is featured with 108 MP main camera with liquid lens with 3x optical zoom. It is packed with quad speakers, Android 10 OS and 5020 mAh battery with 67 watt turbo fast charging support.

Microsoft surface Duo is not a foldable screen phone but is has a twin screen design structure with a smooth hinge between them which is 360-degree rotatable that makes this device unique. This phone is best suited for multitasking. In the display section, it is equipped with dual 5.6 inch screens which after combining change in a 8,1 inch big AMOLED display with a 1800 x 1350 pixel resolution. It comes with stylus for convenience.

It is powered by Snapdragon 855 chipset coupled with 6 Gb of RAM and 128 GB of ROM with 3577 mAh battery with 18 watt fast charging support. In the camera zone, it comprises of single 11 MP (f/2.0) Camera and no any front facing camera.

Huawei mate is again an attractive foldable smartphone which gets converted in a large tablet after unfolding it. It featured a an 8 inch big OLED display (2480 x 2200) when unfolded and an external display of 6.45 inch with resolution of 1160 x 2700 pixels. Both the display comes are of 90 Hz refresh rate. It has quad camera setup at the back side which comprises of 50 MP primary sensor (wide-angle), 12 MP 3x optical telephoto lens and an 8 MP 10x optical periscope telephoto sensor. Front facing camera is featured with 16 MP ultra wide lens.

On specs it is powered by Hisilicon Kirin 900 chipset which is combined with 8 GB of RAM, 256/512GB of internal storage. It comes with 4500 mAh battery with 55 watt fast charging compatibility.

The Royole Flexpai 2 is a revised edition of Royole Flexpai which is the world’s first foldable phone but didn’t get much popularity by tech- community as it is a small Chinese barebone brand. Its display hinge design is tested 2,00,000 times by the company. However, it is equipped with 7.6 inch AMOLED display of resolution 1440 x 1920 pixels (unfolded) and 5.5 inch external display (900 x 1440 pixels).

It has Snapdragon 865 5G SoC with 8GB RAM and 128 GB storage. It is powered by 4450 mAh battery and triple rear camera setup with 64MP wide angle, 64MP Ultra wide and 8MP telephoto lens. The selfie camera comprises of 32MP. The software implemented is based on Android 10.

Huawei Mate Xs is a successor of Mate X and upgrades its hinge structure. It has a falcon Wing design with a flip button to unfold it easily. It consist of 8 inch AMOLED display with 2200 x 2480 pixels resolution when unfolded and 6.6 inches of external display.

This smartphone is powered by Hisilicon Kirin 990 SoC coupled with 8GB RAM and 512GB ROM. In the camera section it comes with Quad camera setup in which 48MP of wide angle lens, 16MP of Ultra Wide angle lens, 8MP of Telephoto lens and Time of Flight(TOF) 3D depth sensor. It comprises of 4500mAh of battery with 55 watt fast charging support.

LG Wing is not a foldable but a twistable screen phone in which the screen above is twisted in a landscape design and the rest of the screen behind it will work as a secondary display. The main display is of 6.8 inch G-OLED panel with 1080 x 2460 pixels resolution and the secondary display is of 3.9 inch p-OLED panel with 1080 x 1240 pixel resolution.

TCL has divulged an extremist new interpretation of the foldable phone structure factor. That one is a tri-crease phone-tablet half and half that folds twice like the letter Z. The principal overlay twists inwards like the Galaxy Fold, while the excess bit twists outwards along the wrinkle likened to the Huawei Mate X.

In an official press, TCL says that its tri-crease phone-tablet crossover idea has 6.65-inch AMOLED show that can be unfurled twice to uncover the full 10-inch screen land. The cover show has 20.8:9 angle proportion and a noteworthy 3K goal. It is additionally the one that clients will generally be connecting with for their everyday exercises.

TCL says it has utilized the restrictive DragonHinge and ButterflyHinge advancements to make the functioning model. The tablet structure factor twists outwards close by the correct wrinkle, actually like the Huawei Mate X. The wrinkle on the left, in any case, twists inwards much the same as the Galaxy Fold.

With respect to the more revolutionary rollable showcase idea, it would seem that a standard phone. In any case, it shrouds a mechanized instrument that keeps a part of the showcase covered up by moving it close by the left edge and the base. When the mechanized instrument is enacted, the secret bit of the showcase extends outwards towards the right, transforming the 6.75-inch flexible AMOLED show into a 7.8-inch tablet. At the point when not being utilized in the tablet mode, the engine naturally withdraws the presentation and transforms the gadget into an ordinary phone.

It is significant that TCL’s rollable idea phone was initially scheduled to make a big appearance at MWC 2020, yet the expo’s crossing out put those plans on pause. Sadly, there is no word on the determinations of these two idea gadgets, and TCL has likewise not reported any estimating or accessibility subtleties up until now.